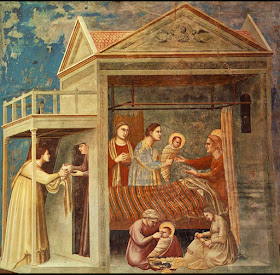 Dearly beloved brethren, the day for which we have longed, the Feast-day of the Blessed and Worshipful and Ever-Virgin Mary, that day is come. Let our land laugh and sing with merriment, bathed in the glory of this great Virgin's rising. She is the flower of the fields on which the priceless lily of the valleys hath blossomed. This is she whose delivery changed the nature that we draw from our first parents, and cleansed away their offence. At her that dolorous sentence which was pronounced over Eve ended its course to her it was never said: "In sorrow thou shalt bring forth children." Gen. iii. 16. She brought forth a Child, even the Lord, but she brought Him forth, not in sorrow, but in joy.

Eve wept, but Mary laughed. Eve's womb was big with tears, but Mary's womb was big with gladness. Eve gave birth to a sinner, but Mary gave birth to the sinless One. The mother of our race brought punishment into the world, but the Mother of our Lord brought salvation into the world. Eve was the foundress of sin, but Mary was the foundress of righteousness. Eve welcomed death, but Mary helped in life. Eve smote, but Mary healed. For Eve's disobedience, Mary offered obedience and for Eve's unbelief, Mary offered faith.

Let Mary now make a loud noise upon the organ, and between its quick notes let the rattling of the Mother's timbrel be heard. Let the gladsome choirs sing with her, and their sweet hymns mingle with the changing music. Hearken to what a song her timbrel will make accompaniment. She saith: "My soul doth magnify the Lord, and my spirit hath rejoiced in God my Saviour. For He hath regarded the lowliness of His hand-maiden, for, behold, from henceforth all generations shall call me blessed for He That is Mighty hath done to me great things." The new miracle of Mary's delivery hath effaced the curse of the frail backslider, and the singing of Mary hath silenced the wailing of Eve.