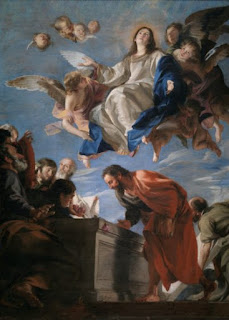 Since indeed the universal Church hath at all times and throughout the ages manifested faith in the bodily Assumption of the Blessed Virgin Mary, and since the Bishops of the whole world by an almost unanimous agreement have petitioned that this truth, which is enshrined in Sacred Scripture and deeply rooted in the souls of Christ's faithful, and is also truly in accord with other revealed truths, should be defined as a dogma of the divine and Catholic Faith, Pope Pius XII, acceding to the requests of the whole Church, decreed that this privilege of the Blessed Virgin Mary be solemnly proclaimed, and thus, on the first day of November of the year of the Great Jubilee, nineteen hundred and fifty, at Rome, in the open square before the Basilica of St. Peter, surrounded by a throng of many Cardinals and Bishops of the Holy Roman Church who had come from distant parts of the earth, and before a great multitude of the faithful, with the whole Catholic world rejoicing, proclaimed in these words and with infallible statement the bodily Assumption of the Blessed Virgin Mary into heaven: Wherefore, having offered to God continual prayers of supplication, and having invoked the light of the Spirit of Truth, to the glory of Almighty God who hath enriched the Virgin Mary with his special favour; in honour of his Son, the immortal King of ages and victor over sin and death; for the increase of the glory of the same august Mother, and for the joy and exultation of the whole Church, by the authority of Our Lord Jesus Christ, of the holy Apostles Peter and Paul, and by our own authority, we pronounce, declare and define it to be a divinely revealed dogma that: The Immaculate Mother of God, Mary ever Virgin, was, at the end of her earthly life, assumed body and soul into heavenly glory.
From the Acts of Pope Pius XII
Father Kevin M Cusick at 7:45 AM
Share