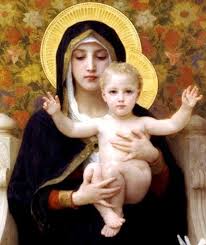 In the year 1931, amid the applause of the whole Catholic world, solemn rites were celebrated to mark the completion of the fifteen centuries which had elapsed since the Council of Ephesus, moving against the Nestorian heresy, had acclaimed the blessed Virgin Mary, of whom Jesus was born, as Mother of God. This acclamation had been made by the Fathers of the Church under the leadership of Pope Celestine.

Pius XI, as Supreme Pontiff, wished to commemorate the notable event and to give lasting proof of his devotion to Mary. Now there had existed for many years in Rome a grand memorial to the proclamation of Ephesus, the triumphal arch in the basilica of Saint Mary Major on the Esquiline Hill. This monument had already been adorned by a previous pontiff, Sixtus III, with mosaics of marvelous workmanship, now falling to pieces from the decay of the passing ages. Pius XI, therefore, out of his own munificence, caused these to be restored most exquisitely and with them the transept of the basilica.

In an Encyclical Letter Pius set forth also the true history of the Council of Ephesus, and expounded fervently and at great length the doctrine of the prerogatives of the Blessed Virgin Mary as Mother of God. He did this that the doctrine of this lofty mystery might sink more deeply into the hearts of the faithful. In it he set forth Mary, the Mother of God, blessed among women, and the most holy Family of Nazareth as the exemplars to be followed above all others, as models of the dignity and holiness of chaste wedlock, as patterns of the holy education to be given youth. Finally that no liturgical detail be lacking, he decreed that the feast of the Divine Motherhood of the Blessed Virgin Mary be celebrated annually on the 11th day of October by the universal Church with a proper Mass and Office under the rite of a double of the second class.

Let us pray.O God, who didst will that, at the announcement of an Angel, thy Word should take flesh in the womb of the Blessed Virgin Mary, grant to us thy suppliants, that we who believe her to be truly the Mother of God may be helped by her intercession with thee.Through the same Jesus Christ, thy Son, Our Lord, Who liveth and reigneth with thee in the unity of the Holy Ghost, God, world without end. R. Amen.